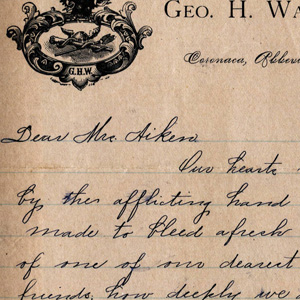 This collection contains letters and other materials surrounding the life of five-term U.S. congressman David Wyatt Aiken, who biographers have styled “South Carolina’s Militant Agrarian.” Born in 1828 in Winnsboro (Fairfield County, S.C.), Aiken served as a colonel in the Confederate Army and later went on to serve in the S.C. House of Representatives. He was a member of the Agricultural and Mechanical Society of South Carolina and served on the executive committee of the National Grange. From 1877 until 1887, he represented South Carolina in the U.S. House of Representatives. He died in 1887 at his home in Cokesbury, South Carolina. The collection consists in large part of letters to his second wife Virginia Carolina Smith Aiken (1831-1900) , as well as a hand-written autobiography and other materials surrounding his life.