Sandlapper: the Magazine of South Carolina 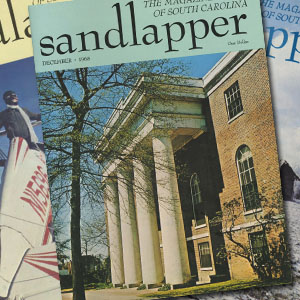 Sandlapper, the Magazine of South Carolina, was established in 1968 by the Lexington lawyer Robert P. Wilkins, Sr. and his wife Rose. Concerned about South Carolina’s image, Wilkins began promoting the state’s beauty, citizens, and history through the magazine.

The first issue appeared in January 1968 with a portrait of Governor James F. Byrnes on the cover. Robert P. Wilkins and Delmar L. Roberts were editors from 1968 through 1972. Wilkins continued the magazine until 1973, when he ceased his activity. It was continued by others until 1982, when it was merged with Tarheel, a North Carolina magazine, to form Carolina Lifestyle. That magazine ceased publication in 1983.

Wilkins revived Sandlapper in 1990 as a glossy, bimonthly magazine, publishing it through RPW Publishing Company. In 1991, Wilkins began publishing the magazine twice a year in a hard-back format. A year later, he returned to the softcover format and began printing it quarterly. In 1994 Sandlapper Society, Inc., was formed to publish the magazine as a nonprofit, advertising-free publication. The society’s mission was to educate readers about South Carolina’s people, places, history, and culture.

The final issue of the magazine was Winter 2011/Spring 2012, and Robert P. Wilkins, Sr. passed away in 2013. Sandlapper uses a variety of South Carolina photographers and writers to showcase the best of the state. Columns about restaurants, bed-and-breakfasts, and recipes are included with articles about towns, counties, history, and trends.