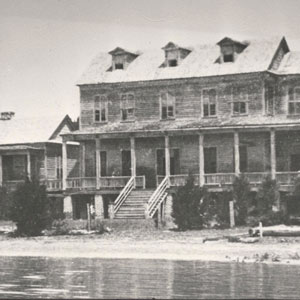 This collection of photographs from the early twentieth century shows life on two South Santee River plantations: Hampton and the Wedge. Hampton Plantation was owned by the Rutledge family, including Archibald Rutledge, Poet Laureate of South Carolina. The Wedge plantation was built by William Lucas in 1826, and remained in the Lucas family until 1929. The third scrapbook features photographs from the nearby town of McClellanville. This small town, often called, “the Village”, was started in the 1850s as a place for nearby plantation owners to escape the summer diseases that were a constant threat on the rice plantations. In the early 20th century, many of these families continued the traditions of their ancestors, traveling to “the Village” for the summer.