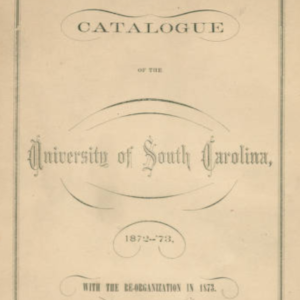 In 1873, the University of South Carolina became the only state-supported Southern university to fully integrate during the Reconstruction Era that followed the Civil War. By 1876, the student body was predominately African-American. After Wade Hampton was elected governor and whites regained control of state government, the University was closed for reorganization in 1877, and reopened in 1880 as an all-white institution. It would remain all-white until desegregation in 1963.
This collection brings together the surviving records from the Reconstruction University, including scholarship lists, room and board lists, and faculty correspondence. Student exams from the time period are included in another digital collection, University of South Carolina Student Exams, 1854-1917. Bringing these materials together online provides a glimpse into the lives of these pioneering African-American students.