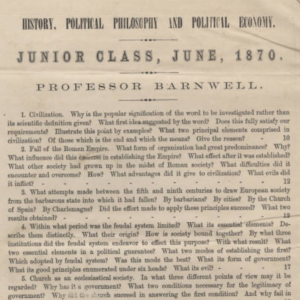 These student examinations date largely from the second half of the 19th century, a period in which the University of South Carolina underwent significant changes not only in its curriculum but also in its student body, its faculty and its educational goals. The exams in this collection that date prior to 1873 reflect the South Carolina College’s original incarnation as a classical institution. This purpose continued even during the American Civil War (1861 – 1865), although the small number of documents from that time demonstrate the impact that the conflict had on students, faculty and the institution itself. Exams from the Reconstruction period following the war (1873 – 1877) demonstrate a shift away from the classical and towards the practical as the university was integrated for the first time. Of particular interest are those exams which appear to be the work of African Americans, since these documents represent some of the few surviving records of these students and their important place in the university’s history.
Many of the exams are undated, but approximate dates are given based on student and faculty records held by the University Archives.